It’s hard to find an area that has been harder hit by the current recession than Las Vegas. At the onset of the mortgage fiasco, Las Vegas was the fastest growing city in the United States. Houses were being constructed at break neck speed, and people were moving there in droves. And then………..it all fell apart. Entire neighborhoods sat empty. Brand new housing tracts and shopping centers sit, unused and forgotten.

And now it appears as though some creative thinking has gotten a hold of the North Las Vegas city council. They have officially declared a state of emergency. No, the city isn’t on fire, No, there is no flood that has washed away a chunk of their town, no earthquake, plague or tsumami to report of, just lack of money.

What’s that, you say?  Having no money can warrant a state of emergency?!? If that was the case I would have declared a State of Emergency a long time ago! Maybe my good ol’ Uncle Sam could send me a couple of bucks to help. Well…..probably not.

It seems to me that there is a loophole in the “state of emergency” declaration. Typically, when a wildfire or earthquake or other natural disaster hits, you could declare a “state of emergency” and it would loose up held funds, and the State or Federal Government could send some much needed money to help with the recovery. But financial emergency?

True, there is nothing specific in the “books” that states what determines an emergency, but financial emergency sounds a bit iffy to me.

Years ago, there was an ad campaign with a rather obnoxious guy in a suit covered in question marks. He stood in front of the capital buiding in Washington D.C. and yelled at me that there was millions of dollars in Washington ready for me to use, and all I had to do was ask for it. So I ponied up the $49.95 and sent for his book. It listed hundreds of programs set up by local and federal agencies to help me. Problem was, not one of them was specific towards me and my situation. But, a specfic chapter told me how to address this little “problem”. Lie.  Okay, maybe not lie, but stretch the truth. Bend the rules so to speak. As an example, if a program was designed to help defray the cost of a daycare facility, and I had a child or two that were too young for school and staying at home, I simply write a name of my “child care” facility on the application and presto……I get a check. Sneaky ?……you bet. But now it seems the same method is being used to apply for government help in the application for North Las Vegas’ declaration of a State of Emergency.

If you took a look at my budget, I don’t think anyone would argue my financial state of emergency. But does that mean I get money from Sacramento or the Feds to help with my recovery? No way! I would be told to hit the road and file for bankruptcy.

I have mentioned in prior blogs, of cities and munipalities, filing for bankruptcy protection under Chapter 9 of the Bankruptcy Code. Most recently, Stockton has anounced it’s plan to file for bankruptcy protection. It’s a tough economy and it calls for tough decisions, but to tuck tail and run to the Capital whining about finances, who do they think they are? Chrysler? This stinks of another, albeit smaller, bailout. A bit like  Oliver asking, “Please sir, might I have some more?” 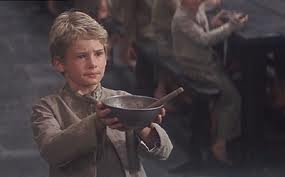 Once upon a time, North Las Vegas was booming. During the housing rush of 2005 and 2006 property values soared, and so did property taxes. The city council should have socked away the excess funds from these skyrocketing property tax bills for a rainy day. But, no……you spend what you make. And like so many of us, when the money flows, so do the expenses. Upgraded streets and lights. Repaving projects, shopping centers, schools, fire departments, salary increases, pensions. Spend…..spend….spend….. And then as quickly as it all had started, it was over. Property values plunged and so did revenue from property taxes. And now with no revenue and no money saved, they crawl to Washington with their hands out asking for tax payer handouts.

Don’t get me wrong, when a natural disaster hits, it’s necessary to ask Uncle Sam for help. No local government has that amount of money saved to recover from these disasters. But if the disaster was due to the short sightedness of the local city council, then suck it up, file for bankruptcy, and start fresh. Don’t take my money to buy a bandage for your hemorraging budget. Chances are that you will end up filing bankruptcy anyway.

But, the city hasn’t stopped there. To garner local support they have spent even more money that they don’t have and put together a campaign regarding the recent layoffs at the police departments. Billboards around town yell; “Warning: Due to recent police layoffs, we can no longer guarantee your safety!”.    What is that?! Scare tactics?! Perhaps instead of paying for billboards, they could pay for police salaries. And speaking of salaries, one has to wonder what the salaries of the North Las Vegas City Council are currently.

Okay……I think at this point,  I may need to calm myself down. I don’t have anything against North Las Vegas, in fact I have found the several other cities have attempted this same tactic but they have all been met with legal challenges. Stockton included. But, it doesn’t excuse their behavior in my book. Face facts. You blew it. Now get over yourselves, file for bankruptcy, pick up the pieces and move on.