Well it’s that time again. Spending time at the beach trying to stay cool, getting the kiddies ready for school, football, and…oh yeah…..watching gas prices jump over $.40 cents per gallon in less than a month!!!!!

It’s a tale as old as time…..or at least the last decade anyway.  You know what I’m talking about. Since the early part of the 21st century, Big Oil has been playing a little game of cat and mouse with consumers. Increase the price of gas until the consumers start complaining, then lower the price down a notch or two until the consumer stops complaining. Sit quietly for a couple of months and start the process all over again. It looks a little like this:  $2.95 per gallon, 3 months later $3.90 per gallon, consumers start to complain, lower price to $3.35 per gallon. “Yay! We aren’t paying $3.90 per gallon anymore!”  But the price is still higher than when it all began. Then 3 months later when the consumer has forgotten all about the greedy Big Oil’s price increase, the process starts all over again.

So what happened?  That depends on who you talk to. Big Oil wants us to believe that inventory is down due to recent problems at several U.S. refineries. Including several fires. Wars in oil rich countries are another common story. But it seems to me that these “problems” always arise when gas prices are at their lowest. Why is it that when gas prices are peaking, just when the consumer begins to complain, you never see a refinery fire or closure due to maintenance? Okay, fine, it’s probably just the consiperacy theorist in me.

But who gets this money? Well, believe it or not, we do. You and I. That’s right. Almost 70% of profits goes back to the investors. That means our Pensions, 401k and IRA accounts grow larger thanks in part to Big Oil profits.  Here are some interesting facts regarding Big Oil stock: 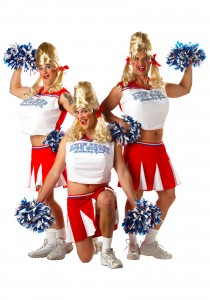 So when I look at that way, it makes me want to grab my daughters pom-poms and start cheering, “Go Big Oil….B…I….G…..O….I….L……..goooooooooo Big Oil !  YAY!  BIG OIL!”  Okay, maybe not. Besides, I do not look particularly good in a cheerleaders outfit. Just ask my wife.

But regardless, I do enjoy watching my portfolio grow.  But is it enough?

As the price of gas increases it affects many other things besides my fuel budget. The price of goods increases. Food and electronics don’t just appear on the store shelf, they have to be driven by truck, big gas guzzling trucks. So to make up for their costs, the costs of the transported goods increases. Want to fly back East to visit a friend or relative? Expect higher airfare due in part to their increased fuel expenses. You can also expect increases at the U.S.P.S., FedEx,  and UPS. Until teleportation has been perfected, our packages and mail must be driven and/or flown to it’s destination. It’s funny how the price increase of one thing can affect the price of so many others.

So what do we do? Stop traveling? Work from home? Buy a motorcycle? Sure. Good luck with that. But rest assured that when gas prices top $5.00 per gallon, and we protest loud enough, gas prices will indeed fall. And for a couple of months we can breathe a sigh of relief because we are only paying $4.90 per gallon rather than the previous $5.35. But if the next 10 years plays out like the previous 10 years, then I guess we should expect to pay around $15.00 per gallon. “Yay! Big Oil!”