Are we Living in a ”Modern-Day Depression”? 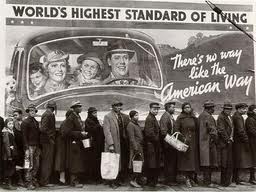 I remember as a child in school, reading about the “Great Depression”. I particularly remember a black and white photo of a farmer and his children running through their farm as a huge sand storm blew through. The “Great Depression” was an interesting subject for me in school and I always wondered if it would happen again.

I am not an economist, but it sure appears as those days may indeed be upon us. It’s appears that I am not alone in my thinking. David Rosenberg, Gluskin Sheff’s chief economist, recently made the statement “We are living in a modern-day depression.”  What would make him say that? Well, for one thing, the Federal Reserve once again cut it’s growth forecast. This time for the second half of 2012 and 2013. This raises the concern about the potential for a “double-dip” recession.  And though technically it’s a recession, the effects would be similar to that of another Great Depression.

But does it really compare to the early part of the 20th century? The barren wasteland of America’s farmlands? The breadlines?  The “Hey buddy, can you spare a dime?” days of yesteryear? I’m not sure. I wasn’t there. But I am here. And who knows how the history books will record this particular piece of history we currently live in? There is no denying the similarities between the two time periods.

Look familiar? Ouch!  Times always look and feel different when you are in the middle of it, rather than looking back on it from the outside, years later.

So what’s the real difference, if any, from today’s problems and those of the depression era? Well, fortunately, we currently have government programs that are helping prop up it’s citizens.  Unemployment, food stamps, welfare. These programs were not available during the 20’s and 30’s, and many families were forced to sleep in parks and stand in food lines just to eat. But these programs can only go so far, and many programs are beginning to decrease or even stop their benefits.

But before you swan dive out a window like a 1929 stock broker, remember that there is hope. The Great Depression lasted from 1929 to 1939. 10 years. And if the current economy is on par, then we should only have a couple more years of this sluggish economy before it finally turns around.

John D. Rockefeller once said “These are days when many are discouraged. In the 93 years of my life, depressions have come and gone. Prosperity has always returned and will again.”  And so it shall.

The only real issue that concerns me is that one of the biggest reasons for the end of the Great Depression, was the advent of World War II. For some strange reason, nothing stimulates an economy better than a good war. So if I had a choice, I guess I would rather have to deal with a slow economy than deal with World War III. But that’s just me.